Facebook has removed ads for a bitcoin (BTC) scam that masqueraded as posts by the crown prince of Abu Dhabi, UAE news site The National reports on June 30

According to the report, a recent scam on social media — dubbed “Bitcoin Loophole” — claimed that Sheikh Mohamed bin Zayed, Crown Prince of Abu Dhabi and Deputy Supreme Commander of the Armed Forces, personally endorsed a scheme that guaranteed riches within a week through bitcoin trading.

The social media giant reportedly deleted the fraudulent posts after thousands of investors handed over personal information and money to criminals based in Ukraine and Argentina.

The scheme asked investors to make an up-front donation of 1,000 UAE dirhams ($272), claiming that the bitcoin investment strategy was the prince’s way of “giving back to the people.” Bitcoin Loophole said it would net investors $13,000 per day. 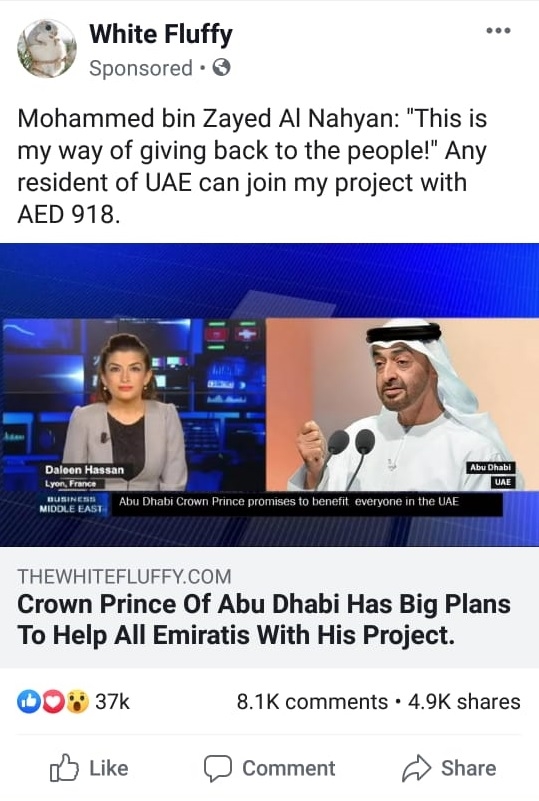 Bitcoin Loophole purportedly convinced investors by combining claims about the bitcoin scheme with details from an actual economic stimulus package devised by the Sheik. It also used images of a United States-based journalist and fake quotes from Microsoft founder Bill Gates.

The Abu Dhabi Media Office has released a statement warning the public to be vigilant about possibly fraudulent investment schemes, saying that government figures will only make announcements through official channels. A Facebook spokesperson told The National:

“Claiming to be another person on Facebook violates our community standards, and we have a dedicated team that’s tasked with helping to detect and block these kinds of scams.”

In January 2018, Facebook became the first major social media platform to ban cryptocurrency-related ads. The platform said at the time that it would ban ads that use “misleading or deceptive promotional practices,” while specifically mentioning initial coin offerings and cryptocurrencies.

Earlier this month, Dutch billionaire John De Mol went so far as to sue Facebook for crypto ads that used his image without permission. De Mol claimed that consumers lost as much as $1.9 million from the ads and that his reputation was damaged as a result.