On Oct. 8, VanEck released research titled “The Investment Case for Bitcoin,” aiming to determine what role the cryptocurrency can play in an investment portfolio. According to VanEck, a firm that attempted to list a Bitcoin-based exchange-traded fund (ETF) with U.S. regulators in 2018, Bitcoin’s combination of “durability, scarcity, privacy, and its nature as a bearer asset all contribute to it holding monetary value.”

1. Monetary value instead of intrinsic value

As VanEck often refers to bitcoin as “digital gold,” the asset manager argues that Bitcoin is a potential store of value. While Bitcoin critics usually point out a major narrative that Bitcoin has no intrinsic value as a primary argument for its failure, VanEck urged to draw a clear distinction between the terms intrinsic value (IV) and monetary value (MV). According to the firm, Bitcoin actually has MV just like gold or silver, artwork or U.S. dollars.

In the full research presentation, VanEck stressed that nothing ever “backs” MV:

“MV is inherently a bet that an object will retain value or increase in value in the future. Items with MV are items that store value and can be seen as claims on future IV. This may make people uncomfortable but it has been true since the dawn of civilization.”

According to VanEck, Bitcoin may also potentially increase portfolio diversification due to low correlation to traditional asset classes such as gold, bonds and broad market equity indices.

To prove the point, the firm provided a table on Bitcoin’s correlation with major market indices such as S&P 500, oil, real estate, measuring the correlation level on a scale from -1 to 1. The firm was analyzed correlation from February 2012 to July 2019. 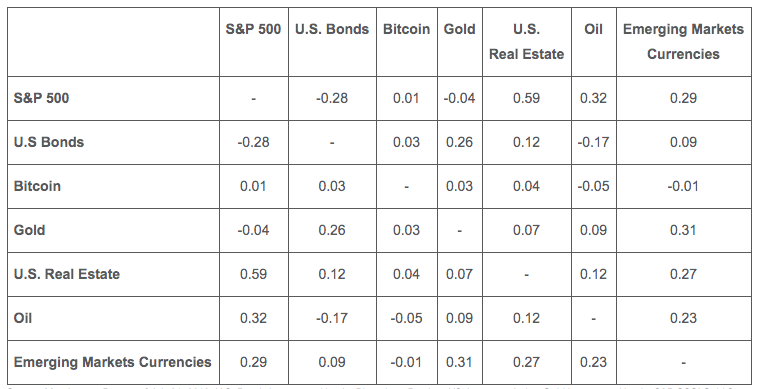 In the report, VanEck also cited Bitcoin’s scarcity or limited supply as a major reason for the asset’s success. Bitcoin halvings, defined as a 50% block reward cut to Bitcoin production rate, are programmed to occur roughly every four years, VanEck explained, noting that each halving event has eventually led to growth of Bitcoin’s price.

The next Bitcoin’s halving is scheduled for May 2020. As such, famous Bitcoin bull and programmer John McAfee recently cited Bitcoin’s scarcity as a primary reason for Bitcoin to hit $1 million per coin in 2020. 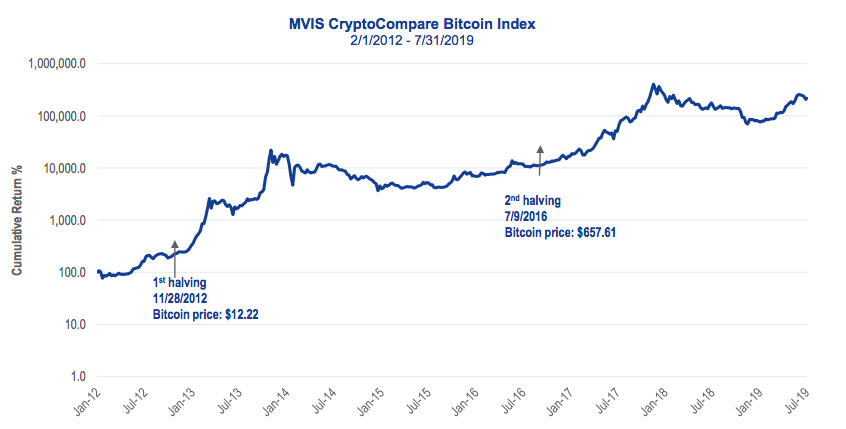 As part of the growing adoption of Bitcoin VanEck cited the fact that Bitcoin transactions exceed 400,000 permissionless transactions a day, while Bitcoin on-chain transactions amount to a notable portion of SWIFT transactions. The firm also noted that existing crypto exchanges are healthy and not going away, citing the position of companies Bitfinex and Binance.

In mid-September, the Chicago Board Options Exchange’s BZX Equity Exchange withdrew its VanEck/SolidX Bitcoin ETF proposal from consideration before the U.S. Securities and Exchange Commission.